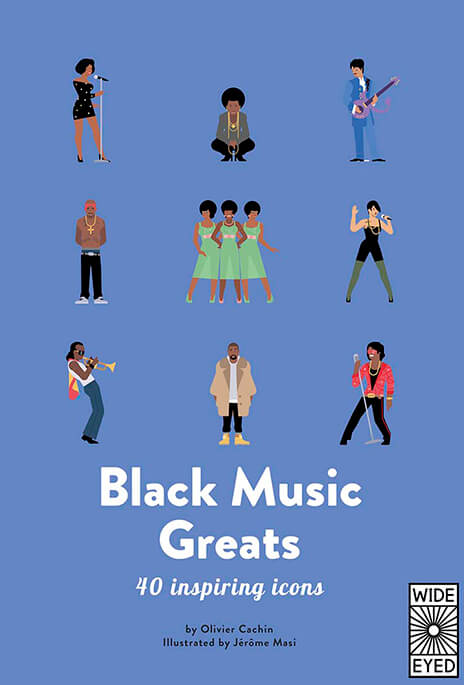 The biggest names…the coolest sounds…the 40 most inspirational movers, shakers, and innovators in black music are here! In this fun, fact-packed book from the 40 Inspiring Icons series, learn how these black musicians changed music, from the creation of blues to the invention of rap.

Meet the Godfather of Funk, the High Priestess of Soul, and the King of Reggae. Learn how Marvin Gaye shaped the sound of Motown, how N.W.A. redefined rap, and what made the Supremes, supreme. From Robert Johnson, who recorded one of the first examples of the blues in 1936, to rap superstar Drake, whose 2012 album Views spent 13 weeks at number one on the US Billboard 200, these are the 40 black artists to be listened to and learned about by all:

Each spread presents a single musician or band, highlighting key facts about their background, most popular songs, most iconic shows, genre-defining techniques, friends, rivals, and nicknames, along with a fun, illustrated depiction of them that calls out elements of their signature style.

With so many icons to choose from, which will you add to your playlist?

Each book in the 40 Inspiring Icons series introduces readers to a fascinating non-fiction subject through its 40 most famous people or groups. Explore these other great topics through their most interesting icons: People of Peace, Super Scientists, Soccer Stars, Fantastic Footballers, Music Legends, and Greek Gods and Heroes.