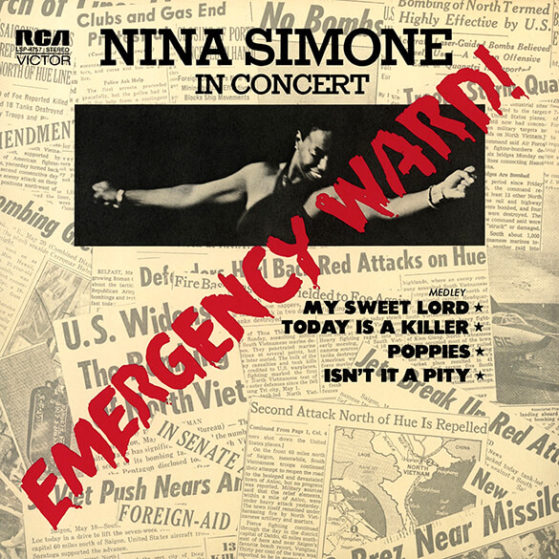 Personal and political torment had escalated by the time Nina recorded Emergency Ward (which is, strictly speaking, only half a live album). The newspaper headlines that adorn the original cover scream “Laser-Guided Bombs” (nothing new under the sun, it seems) and “Viet Push”, and fix the 1972 album firmly in its time. The Vietnam War is the unspoken fact that dominates the album. The live segment was recorded at Fort Dix, a military base in New Jersey, before an audience primarily composed of black GIs. The tone is apocalyptic: an expectation of the imminent end tends to concentrate the mind on spiritual matters.

Emergency Ward is a reckoning, a one-sided dialogue between Nina and her Creator. “Isn’t it a pity, My God?” is her message.

In 1971, empowered by Marvin Gaye’s What’s Going On (and Sly Stone’s more disturbing There’s A Riot Goin’ On) soul music had entered a new phase: serious enough to expose the ills of the nation, and powerful enough to dispense spiritual healing.

Nina had anticipated the change. Backlash Blues from Sings the Blues, to give one example, offers and important analysis of black politics and the white world. The overlooked masterwork of Nina Simone & Piano transcends black politics to address the concerns of the entire human family.

Vindicated by the new spirit, Nina’s response was to return to her gospel roots. Emergency Ward documents her collaboration with the Bethany Baptist Church Junior Choir of South Jamaica, NY. The main item on the program was to be an extended My Sweet Lord, the neo-gospel anthem by George Harrison. Advance reports suggested a restatement of the simple faith of Nina’s upbringing (as the sixth child of a preacher’s family in rural North Carolina). Advance reports were wrong. Nina Simone, like the Lord, moves in mysterious ways.

Handclaps and massed “Hallelujahs” accompany Nina as she yearns for spiritual union and declares impatience with the slow pace of mystic revelation. The groove is disrupted and the choir is quelled as Nina introduces a second theme – her setting of a poem by David Nelson, Today Is a Killer. This develops (after a reprise of My Sweet Lord) into a meditation on the contrast between the innocence of nature and a rapacious, man-made world.

The link between Harrison’s uplifting spiritual and Nelson’s somber poem isn’t made clear until the final moment, and Nina declares “Today, who are you Lord? YOU ARE A KILLER!” as the choir chimes with a grand, affirmative “Hallelujah”.

It is a staggering moment, with more impact because of the sacred context. To co-opt the Bethany Baptist Church Junior Choir of South Jamaica, NY, into this act of blasphemy is a masterstroke of subversion. Nina is known for her willfulness and feats of audacity, but this surpasses everything.

Additions: Let It Be Me